Error: API requests are being delayed for this account. New posts will not be retrieved.

And the Winner for Best Party goes to…the Academy Awards! 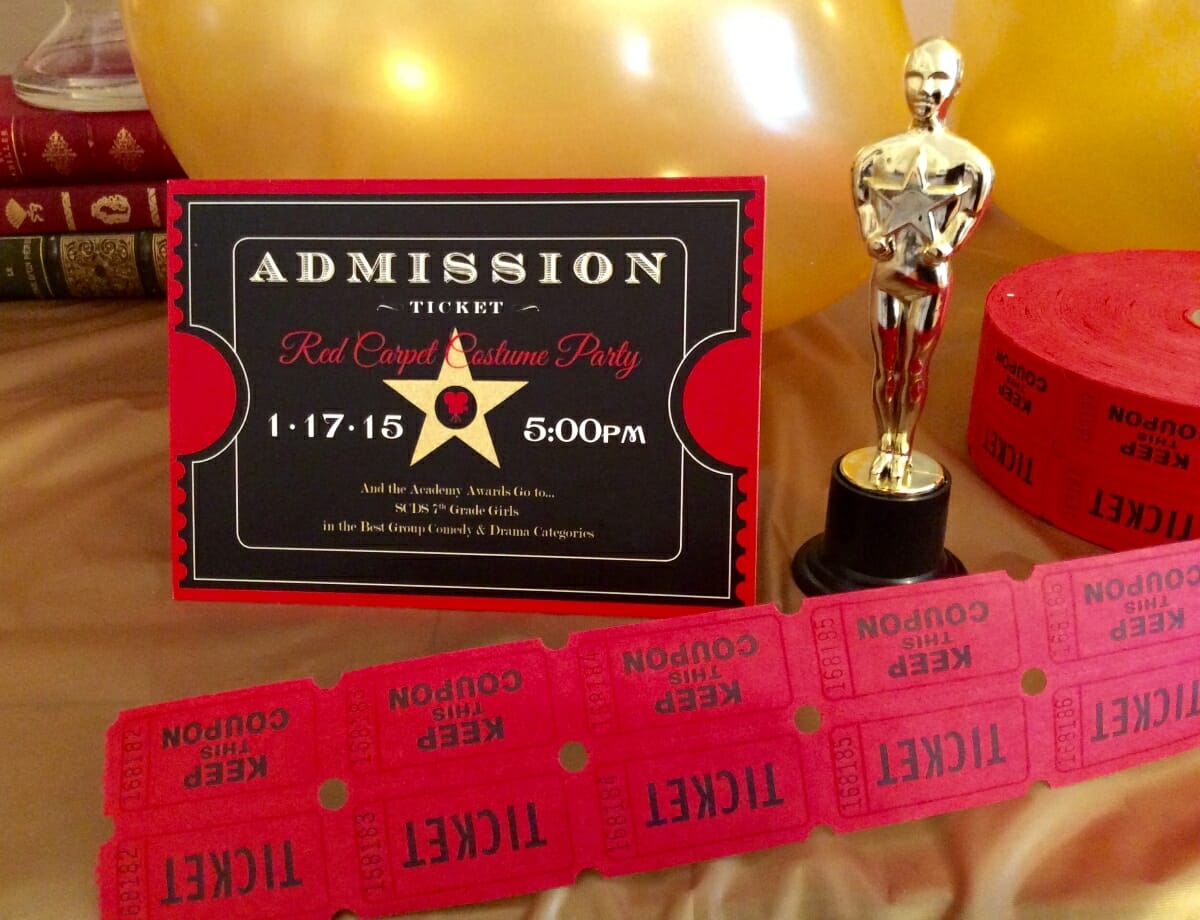 A few years ago, we hosted an Academy Awards Themed Costume Party for Isabelle and her middle school classmates. The girls came dressed as their favorite character or star some from television and some the big screen.

We had Disney represented with Lilo & Stitch and Darla (the headgear wearing girl in Finding Nemo), The Hunger Games Katness Everdeen and Effie Trinket’s (in her butterfly outfit), Alice in Wonderland’s Red Queen and White Queen, Dorothy from the Wizard of Oz, plus some TV pairs like Lucy & Ethel and Castle & Beckett.

There were four activities:

The basic layout of the party was arrival on a “red carpet” with “spotlights” on either side of the front door with a fog machine adding some ambience, then inside our living room was cleared out except for 3 stand up cocktail sized tables and the photo booth set up.

We went with the stand up tables because seated food service felt too stuffy for this party. We skipped bar stools and the girls just grazed on finger foods so no need to take up more space or spend money on them.

The gilded, glittering theme was throughout and started off with the above small globe lights strung from corner to corner of the room with strands of gold tinsel hanging from them. Full DIY info is here.

Behind the tables there was a “wall” of gold helium balloons that were a great bang for the buck item. It was ideal too for saving space and while adding impact at the same time.

Another nod to the Hollywood was the “walk of fame” stars strung with fishing line in the window. Each guest had their name on a star.

Next came the kitchen that included a tiered popcorn stand, white velvet couch with gold lantern display over it, food buffet and dessert buffet. The biggest hit of the party was the Make-Your-Own Italian Soda bar. Full DIY instructions for the Italian Soda Are are here.

The girls all had a great time! And I have to say, so did our friends that helped Steven and I out. Judging the Screen Take Contest was hilarious!

All photos by Elizabeth Curtiss

Gifts from the Kitchen: Homemade Granola

15 Flight Essentials for Moms and Families

10 Essentials for a Low-Key (and Realistic) Beach Picnic

No Fail Steps to Finding Your Perfect Airbnb